This event will be held virtually on Zoom. 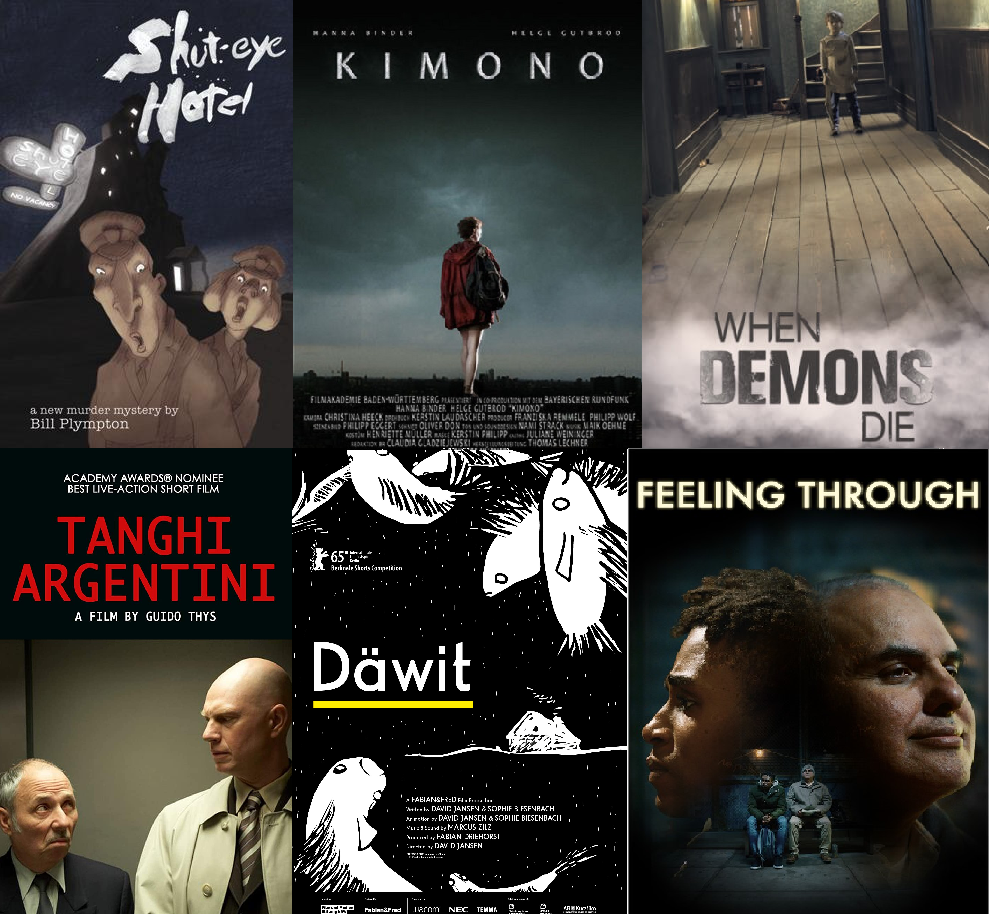 Grab your movie candy and enjoy a selection of 6 short films. Be sure to watch the films before attending the program. They will not be shown during the event.

Shuteye Hotel
A film noir murder mystery that takes place in a sleazy hotel. As cops investigate the gruesome murders, they become the victims of this evil force. What Jaws did to swimming, SHUTEYE HOTEL will do for sleeping… Winner of Best Short Film at Málaga International Week of Fantastic Cinema and nominated for Best Narrative Short at the Tribeca Film Festival.

Kimono
Looking for something to eat, a homeless woman sneaks into a man’s apartment. When she is almost caught, she hides in his closet. But instead of leaving the apartment, she gets interested in the man and starts to secretly live there and observe him. What she doesn’t realize, however, is that the man has already noticed her presence. Youth Jury Award winner and Best Short Fiction Film nominee at the Dresden Film Festival.

When Demons Die
8-year old Joshua has never left his home for dangerous creatures live outside their isolated farmhouse - the Gorgers. But when his father Aaron mysteriously disappears Joshua is forced to go outside. A decision that will change his life forever. **Sitges International Film Festival ** nominee for Best Short Film.

Tanghi Argentini
An office clerk with a hankering to tango enlists the support of a workplace colleague as he prepares for a date. It's Christmas time and the concept of giving assumes fairy tale proportions in this beguiling modern story.

Däwit
A wolf child, a cat, an angel. Animated in woodcut style, the film tells the story of Daewit who is rescued from his violent father and grows up far away from his family among wolves. Embarking on a mysterious journey to find his own identity, he encounters great hardship but ultimately finds peace in forgiveness.  Nominated for Best Short Film at the Berlin International Film Festival.

Feeling Through
Feeling Through is a coming of age story that follows Tereek, a teen wandering the streets of New York, desperate for a place to crash when he encounters Artie, a Deaf-Blind man in need of help getting home. From an awkward meeting between strangers emerges an intimate bond, and a journey that forever changes Tereek. Feeling Through is the first film to star a Deaf-Blind actor.

You can access all 6 films using our Kanopy streaming service available for FREE with your library card. If you do not have a library card, you can visit our website HERE or call your local Cuyahoga County Library branch for assistance.

Registration is required to receive a link to the Zoom program.

If you have any questions about this program please contact Brooklyn Branch at 216-398-4600 and ask for a librarian.